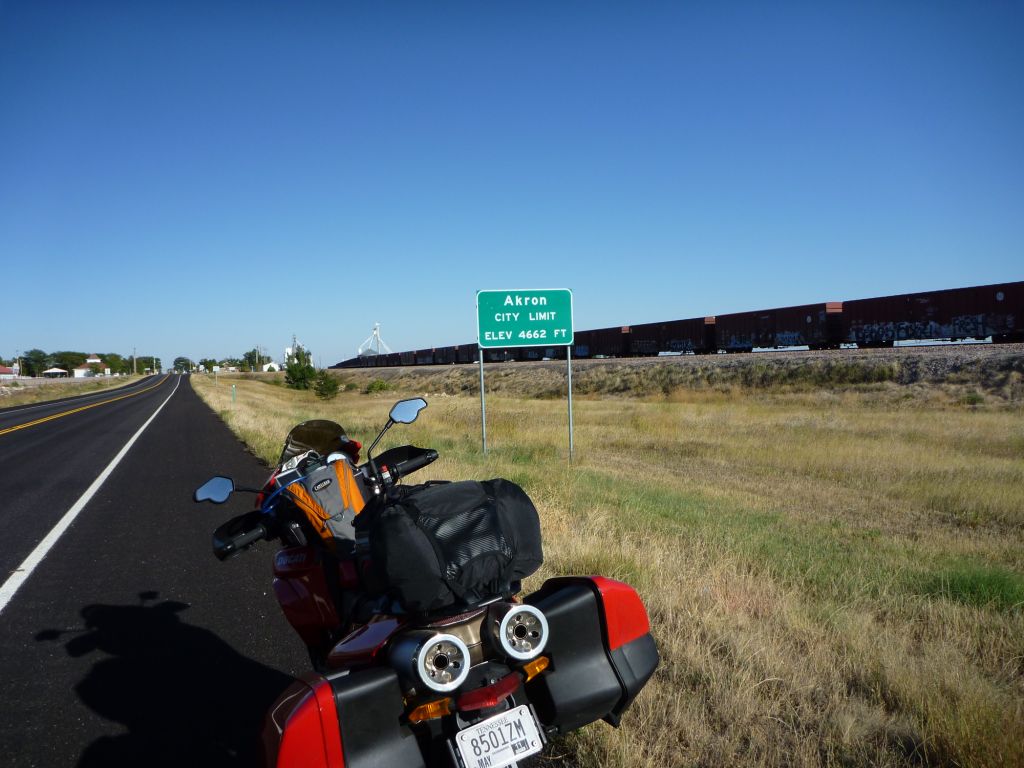 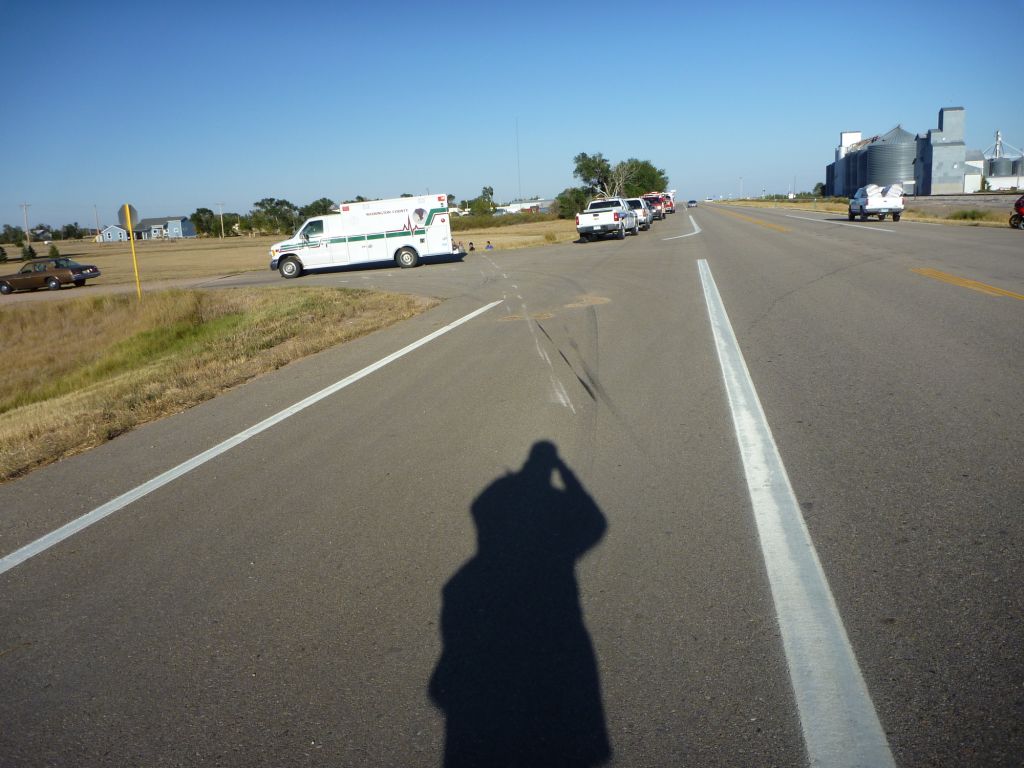 Tire and scrape marks from the Harley crash. 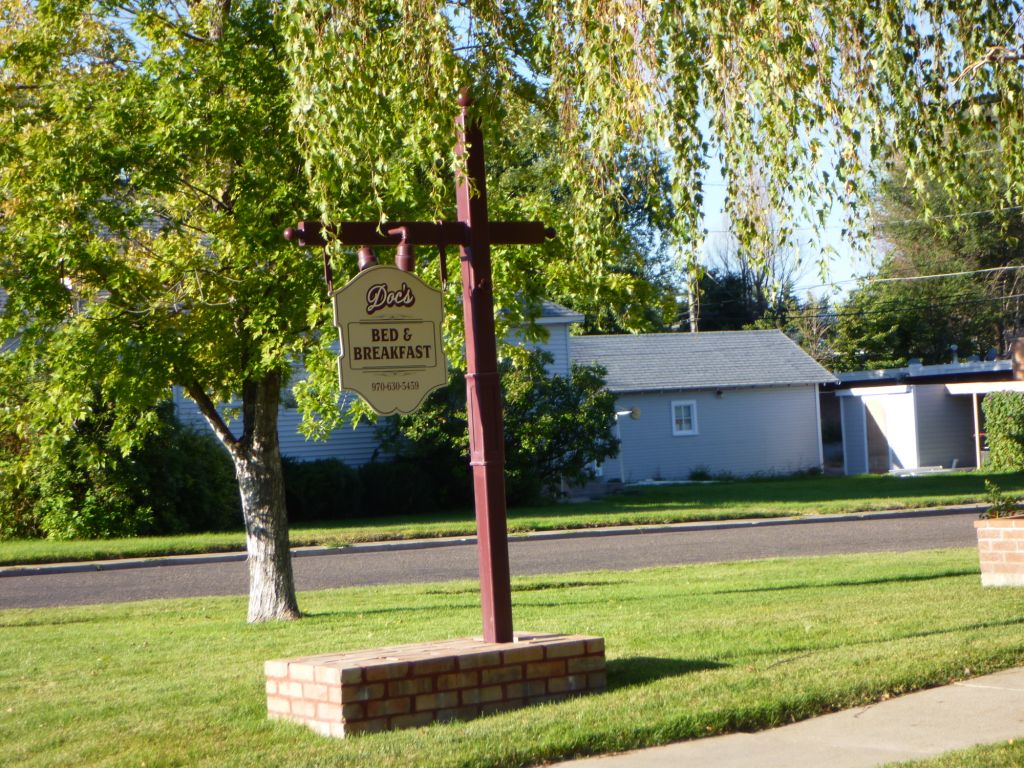 Bed and Breakfast in Wray CO. 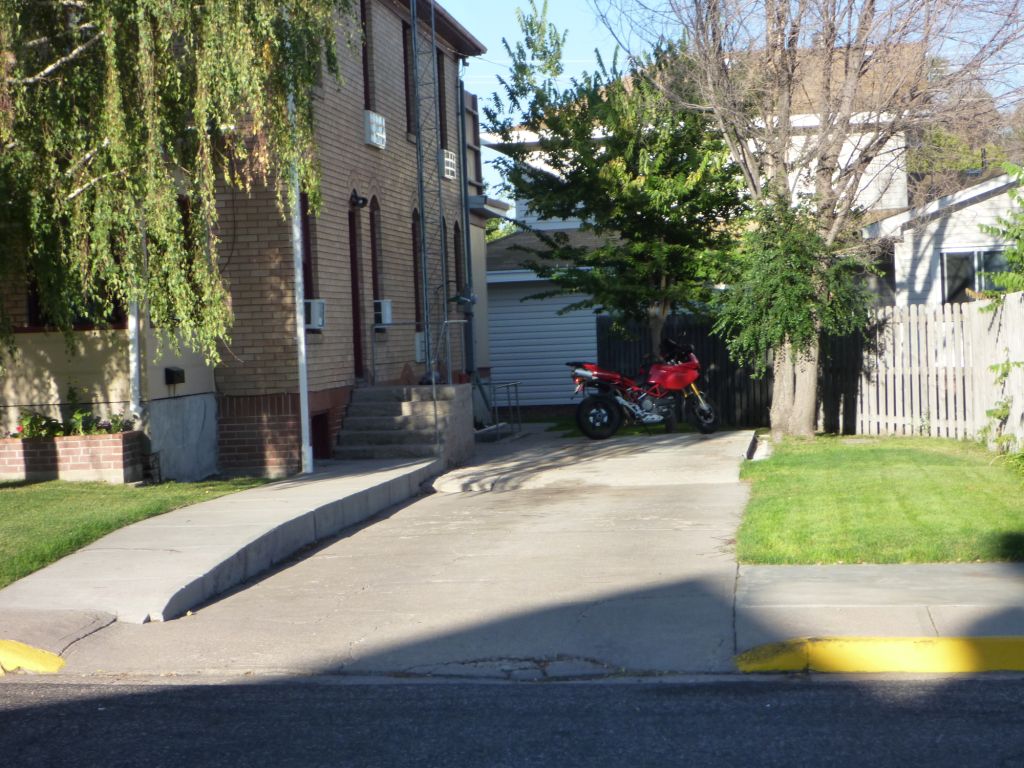 Bed and Breakfast in Wray CO.

Some notes about the motorcycle accident I witnessed in Colorado:

In between Akron and the next town, the two riders on Harley Big Twins passed me while I had stopped on the side of the road to take some some medicine for my head cold and sore throat.

The rider that had the accident had regular handlebars and the other bike had ape hangers.  I think they both had their feet on the highway pegs.  They were wearing short sleeves, no helmets, and I was thinking to myself how uncomfortable that must be in the wind and sun.  It was very windy with strong crosswinds.

I caught up to them after my stop and was just following at distance – maybe 100-200 feet, less at times, I was thinking about passing them as they were going a bit under the speed limit of 65.  But I decided just follow them for a while since I did not have that far to go.  Although I was following them I was not paying super close attention to them other than to maintain the distance.  I did not get up too close because the bikes were so loud.

There were some buildings on the right side of the road and strong gusts of wind were blowing across the road as we passed by them.  When the problem started with the bike that eventually crashed – I had the distinct feeling for a moment that the guy was just clowning around, doing a serpentine maneuver.

His bike first rolled (leaned) to the left and sort of moved over the centerline, it seems that he tried to correct to the right but overshot  and then he went hard to left in front of an on-coming car – I was sure they were going to hit right in front of me and perhaps come into my lane.  I saw sparks from the floor board touchdown.    At that moment my attention  was directed toward my own hard braking and moving over to the shoulder as I really thought the car and the bike were going to hit and maybe come into my lane.

The next time I glanced toward the bike, he was already done on his left side and had missed the car.  The bike disappeared over the embankment and ended up in the ditch maybe about 50 to 100 feet from the edge of the road.

I parked my bike on the shoulder and got down to the rider as fast as I could – when I first reached him he was curled up on his right side facing the direction he came from.  He had obvious head injuries (no helmet) and it looked like he had bitten his tongue pretty hard.  Some road rash, but not a lot.  I knelt down beside him and held him still while talking to him.  His friend came down there I asked if they had called 911 and he indicated a gentleman up on the road was calling.  I looked up and he was.  I continued to try keep the injured guy still and talking.  He did not lose consciousness after I got to him.   Within a few minutes a young lady with obvious medical training joined us – I asked if she was a nurse and I think she said she was a paramedic – she seemed very competent so I just followed her lead.  Later, another young gentleman appeared and said he was a paramedic as well.   At that point I stepped back – she asked him if he was wearing a helmet and when he said no, she was clearly perturbed and made a comment about “donorcycles”.

She asked him if he remembered how the accident happened and he said yes, but the explanation was not clear at all.  He had also flunked his day of the week test – he said it was Tuesday.   I thought I heard him say something about “couldn’t steer”  but by the time I got my helmet and earplugs out they were not taking about that anymore – she was moving on to a further assessment of his injuries.   I walked back over to my bike just as the trooper and ambulance arrived.

I went back over and a group of people had picked his bike up – it had scrape marks on the left side but really nothing on the right.

I stood around a few more minutes and when the troopers did not seem interested in talking to me, I went back to my bike, put my helmet back on and continued on to Wray CO and my B & B for the night.