After a nice evening at my B & B in Wray CO, I left early in the morning traveling east on US 34.  I was stopping along the way to read a few historical markers although it was sometimes hard to see the signs due to the early morning sun.  About 28 miles east of the Nebraska line US 34 turned north, and after roughly a mile I saw a marker up ahead as I was zooming along at a good clip since there was almost zero traffic.  I could see there was a paved horseshoe pull-off so I just slowed a bit and was going to just swoop into the horseshoe as there was no one else there.  But with the sun in my eyes, I failed to notice the layer of sand across the pull off –  The aggressive lean I executed to enter the horseshoe was, of course, not a good move.  The front wheel slid out faster than I could think, “dumb move”, and I was immediately sliding along the pavement.   After I stopped sliding and rolling, I got up and did an inventory of my bodily parts.  Thanks to good gear, all I had was a sore right knee and hip where I hit the pavement – lucky, again.   I picked up the bike, really wishing the road was not so lightly traveled.  Of course, just as I got it picked up and leaned on the stand, a pickup full of construction workers stopped…  But they did tell me there was a real town just a few miles up the road. They could not wait around for me to check the bike out.  They did say there would be other crews going back and forth during the morning in case I needed any more help.  And off they went.  Looking at the bike I found that the right saddlebag and the right hand guard really saved the bike from any real damage on the side.  However, the mounts for the upper handlebar mounted fairing were broken, so that was a problem.  Next I started up the bike and rode it around the horseshoe – I could ride it but the upper fairing laid back on the tank and needed securing someway.  The rear brake pedal was bent and not working but looked like if I was lucky I could straighten it enough to work.   I pondered the wisdom of travelling alone for a few minutes and then decided the best thing to do would be to get to the town and see if I could find some sort of shop where I could do some repairs – I also had to figure out how ride while holding the fairlng up with one hand.

I called Sandy and had her look up the nearest Ducati dealer – the nearest dealer in the direction I was going was Letko Cycles in Olathe KS (basically Kansas City)… about 450 miles east.  That told me I was on my own to MacGyver a repair.  So on to the nearby town of Benkelman NE.  It was a bit difficult riding with the broken fairing mounts so I stopped at the first place I knew there would be mechanics – Deveny Ford.  They were more than friendly and helpful – one of the mechanics said I could use his tools and he pointed me to some scrap bins out back were I might find some raw materials for MacGyvering.  After some study, pondering and experimenting I came up with a fix involving reinforced hydraulic hose, zip ties, and duct tape.  In fact, it worked so well that I was able to easily ride all the way home without further problems – which was good since the dealer in Kansas did not have the mounts I needed.  I was also able to straighten the brake pedal (carefully) enough to work properly.  As I recall, the dealership only charged me $20 for the use of the space and tools, etc.  Great folks.

I continued on secondary roads until I worked my way down to Salina KS where I could pick up Interstate 70 for a more direct route to Kansas City and on back home.  However, I had one more obstacle for the day, a big dust storm in Kansas that required stopping for a while and waiting it out. 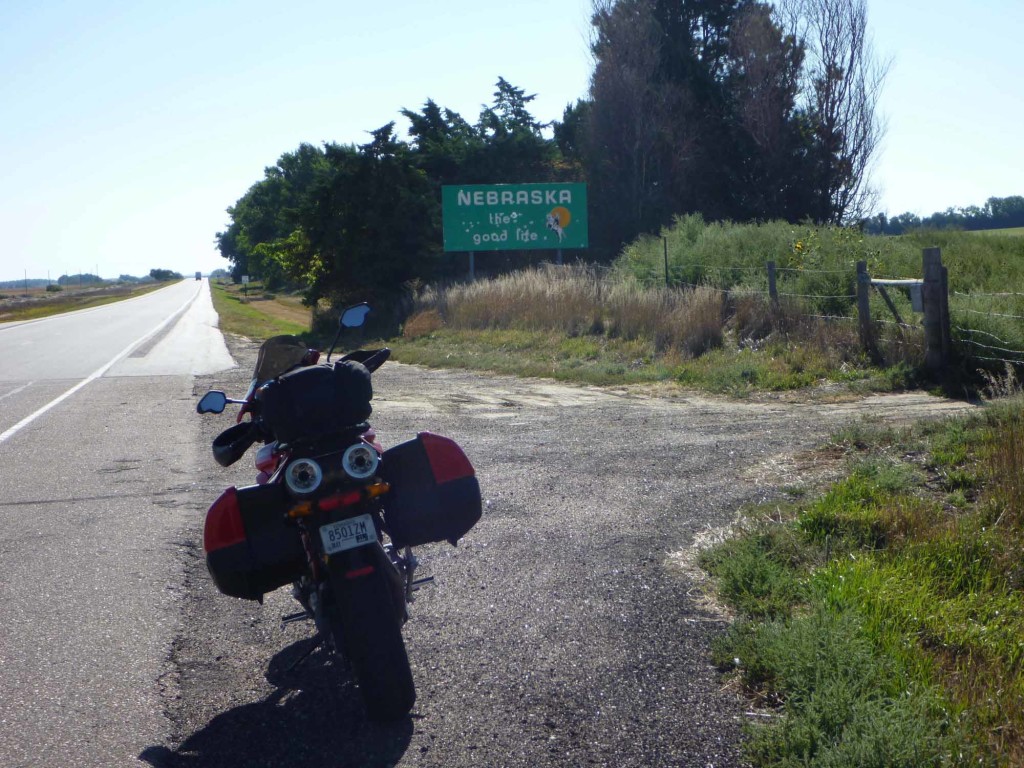 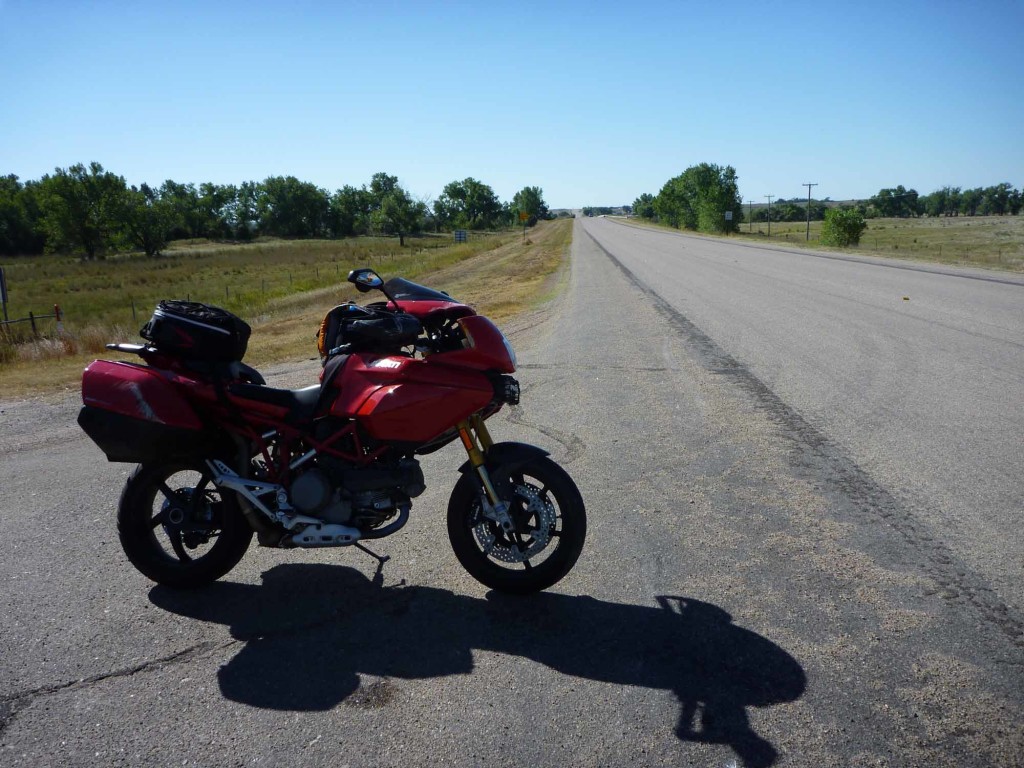 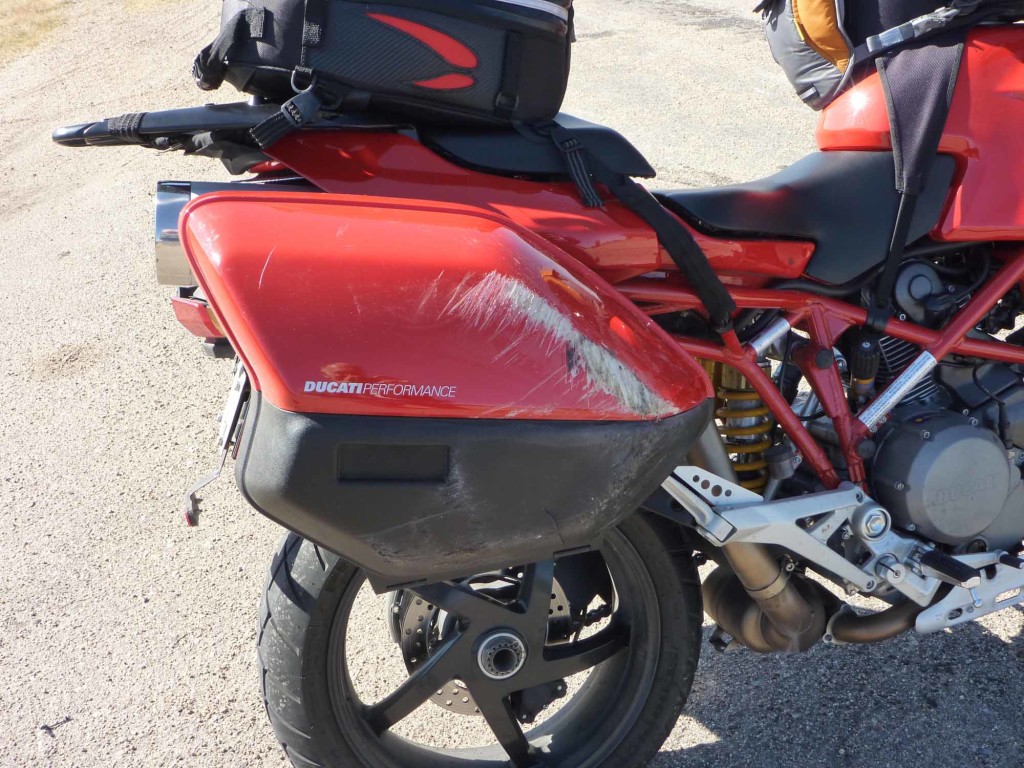 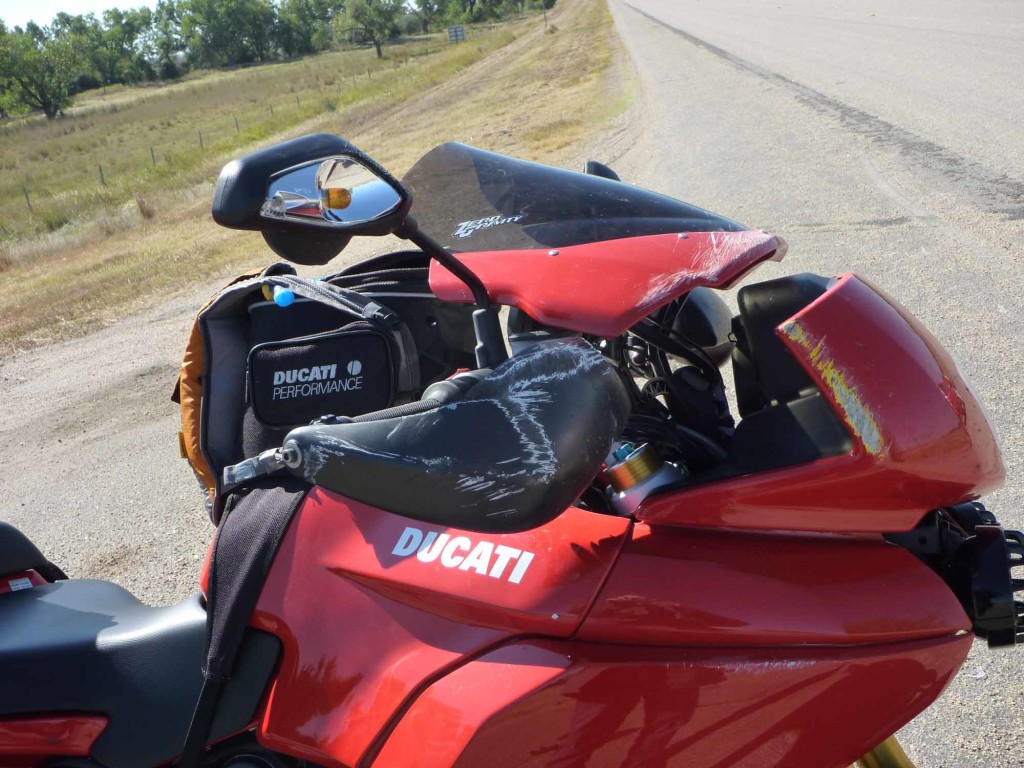 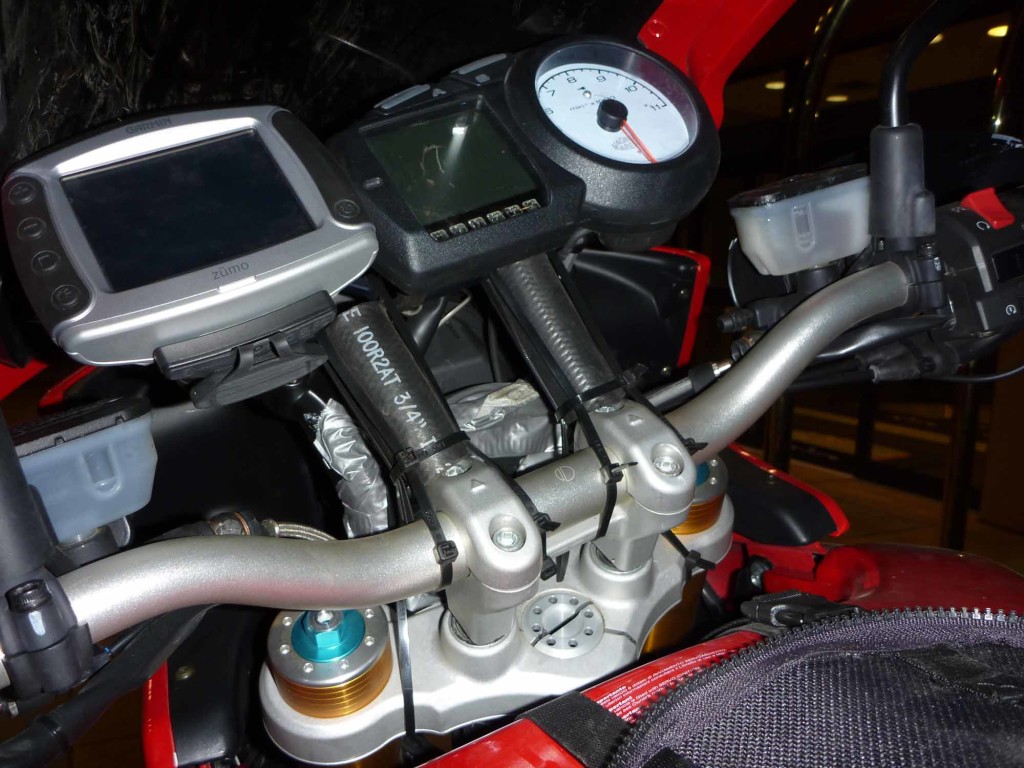 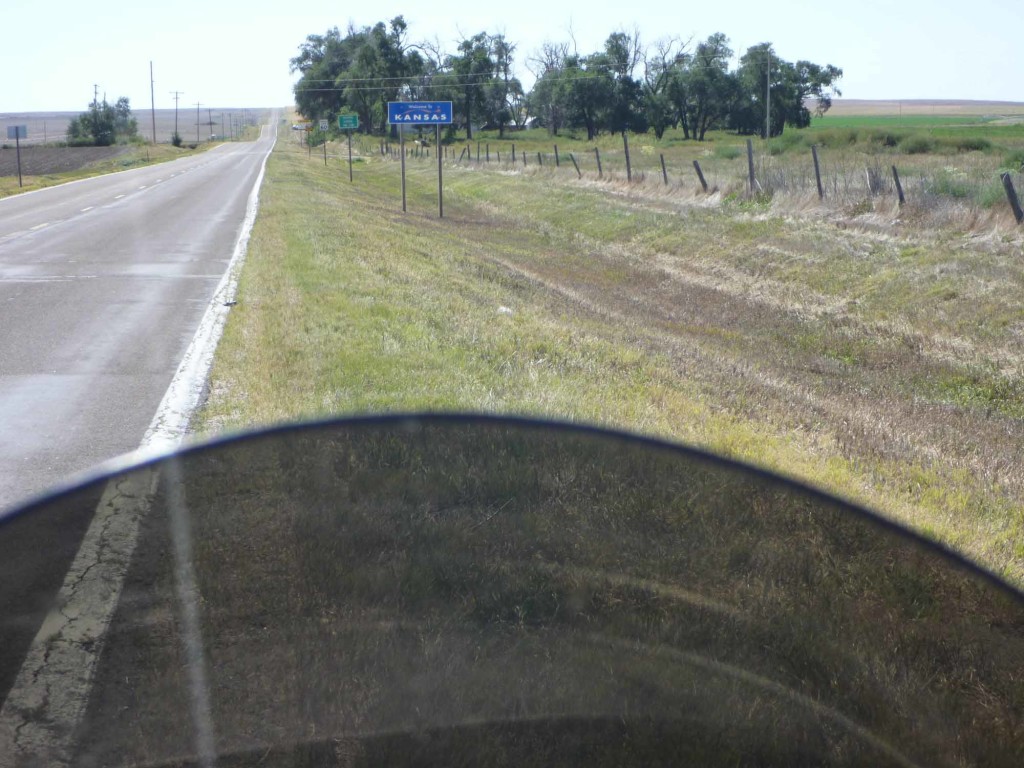 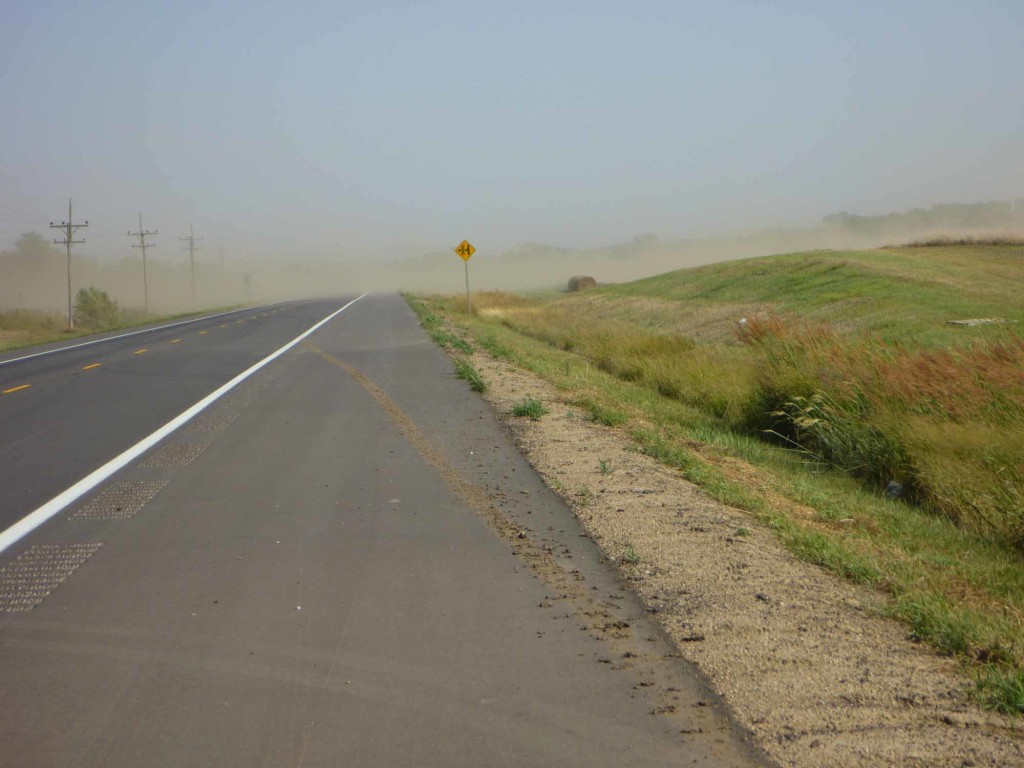