RideAbout65 Day 10 report.  Left the Delta hotel early – I would ride the central part of PEI today and stop along the way for breakfast.  I went North out of Charlottetown toward the coast and the PEI National Park.  There was very little traffic and the road north took me by a lot of farms.  There seems to be a lot of cattle farms in addition to crops.  As I got up to the coast there was a fishing village every few miles.  In the first larger village I stopped for breakfast at a small café.  The people were friendly and the service was, as always, exceptional.  The coffee was good and the food even better.  I sat for a while, read the local paper, and talked to several people about my trip and the weather (everyone talks weather…).  From there I continued east along the coast stopping here and there to look at lighthouses and other interesting things…and as always, every time I stopped, talk to someone.  Once I had stopped to look at my map and a guy drove up in a golf cart seemingly from no where to ask if I needed help.  By now I was getting used to helpfulness of the locals but it is sometimes still a surprise.  Anyway, this guy also had two golden retrievers riding with him in the cart.  They were happy to greet me and get their ears scratched.  I continued around my loop, passing through the larger towns of Kensington and Summerside.  I now had to start thinking about what I would do next – I examined the thought of riding the Cabot Trail but based on my travels so far I knew I was looking at about 4 days to get over to it, ride it, and get back.  My knee had been bothering me from all the time in the saddle and I finally made the decision that some things would have to be left to a future return trip.  And I still had a lot of good roads between here and home.  So back over the bridge I went and then a quick run back into Nova Scotia to get the t-shirts I failed to get the first time.  My next destination was Moncton, NB – a fairly large city where I would stop for the night and consider my plan – or should I say, make a plan – I have really made each days tentative plan the night before with not much advance planning other than the big picture – for example: “ride to Nova Scotia”.  Oh, by the way, no rain today even though everyone said it would. 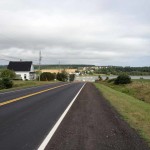 The village of Rusticoville, PEI 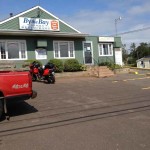 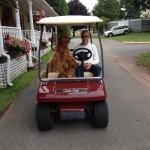 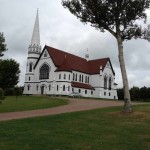 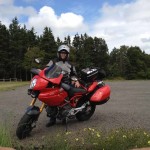 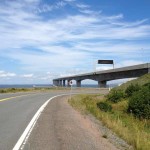