RideAbout65 Day 11 report.  I decided last night that I would start to work my way back toward home – of course that is still about 2000 miles away.  My plan is to leave the Moncton Hampton and head generally west on some interesting looking back roads.  By doing that I would end up at the U.S.A. border in a fairly remote location.  Just to be sure I looked at the border crossings website and made sure there was a border crossing in that area and that it was open.  The back roads I had chosen were exceptional except for one thing – the pavement – the pavement here really takes a beating from the weather so some stretches of the back roads are almost like unpaved sections, in fact, unpaved might have been smoother.  It was a good morning of riding – once again I stopped at a small café for a mid-morning snack.  Then I finally got the rain that had been predicted every day but never happened.  At the first drops I pulled off under a tree and put on the rain gear.  Maybe an hour of rain but I kept the rain gear on for a while just in case…no more rain though.  I stopped at Frederickton, the last large city I would pass in New Brunswick.  As I was passing through the downtown area I saw a group of red coated military people marching down the sidewalk with bagpipes and drums – well, I just had to stop for that.  It turns out that it was a changing of the guard ceremony for a historic fort.  I stopped and took video and photographs of the ceremony.  Quite impressive.  Then the parking meter nazi walked up and asked would I be here long as I had not put any money in the meter – while I did so, we talked of course.  He told me the best way thru town to see the sights and end up where I could catch the back road I wanted to the border.  As I passed through the last town before the border (McAdam) I happened to look off to the side and there was a massive old train station.  I rode up to it and found that it had been restored but was also apparently still being used to some extent.  It was a beautiful old building and much care had been taken in the restoration.  Then on to the border – the crossing was quiet and small as you might expect – the guards must have been starved for conversation because they came out and looked at my bike and wanted to know about my trip.  The road from the border crossing into where I caught I95 into Bangor was exceptionally nice.  When I pulled in at the Hampton in Bangor my total trip mileage to date was 2637 miles.  Tomorrow I hope to make it down to the bed & breakfast in Vermont that was recommended in Backroads magazine.  I did not get to stay there on the way up because they were full. 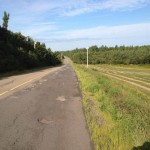 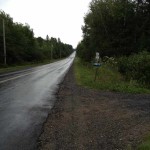 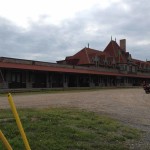 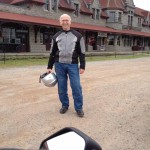 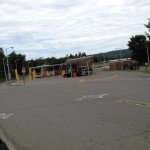 Lonely Border Station at Vanceboro, ME 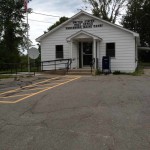 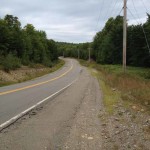