RideAbout65 Day 15 report – Part 1.  So far, my daily reports have been endless gushing about good roads and great scenery, well, today we finally hit a small but pesky pothole in the road.  After talking to my friend Dave in Dayton and my favorite niece in Louisville, our plans were roughly made for visits in the next day or two.  I started hauling my gear out to the bike in preparation for the ritual loading up of the bike.  However, when I looked at the bike as I came out the door something was off – it was sitting differently – a closer look revealed…a flat rear tire.  Right away, I knew this day would be different from the others so far.  I found a large sheet metal screw in the tire.  Luckily I did put together a pretty good flat tire kit and brought it along.  I set about putting a tire plug in the hole as I reflected on my good luck that I was here under the canopy of the Clarion, PA Hampton Inn fixing the tire rather than alongside some desolate stretch of New Brunswick back road in the pouring rain.  After plugging the tire and loading up I decided to visit a local motorcycle shop up the road and check the tire over once more before beginning the days travel.  We squirted soapy water on the plug and no leakage.  They said be careful since it is a plugged tire and I agreed.  I had not eaten yet this morning so I asked where to get some good breakfast in Clarion. As usual in most small towns there is always a restaurant across from the courthouse and that is where they directed me – it was almost worth having a flat tire for…after eating and visiting with the friendly locals I waddled out to my bike and began the day anew. 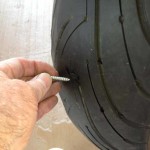 Surprise – you have been screwed – Flat Tire 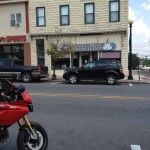 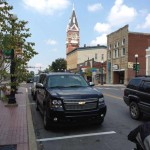 RideAbout65 Day 15 report – Part 2.  My mother was a weather watcher; to say she was obsessed with the weather would not do her weather interest justice.  Once there was a weather channel on TV, that is the channel she would have on all day.  She knew all the weather people by name and by their personal histories and she had her favorites.  The blame for all bad weather in her opinion was the “jet stream” – the jet stream is acting up again, etc.  But also, a most endearing aspect of my Mother’s weather life was Groundhog Day; she celebrated Groundhog Day as a major holiday, counting down the days to Punxsutawney Phil’s appearance.  Now I don’t know if she seriously believed in the groundhog sees shadow or not theory, but she certainly enjoyed the whole spectacle of it.  And it was a yearly event that she and I shared just for the fun of it.  Most other folks in the family likely thought us a little silly, but it was just one of those Mother/son things.  Anyway, on this clear and beautiful morning, having fixed a flat tire and had my fill of good grub, I happened to look at the map and realize that I am only a few miles from the town of Punxsutawney, PA, home of Phil the famous groundhog.  It is immediately clear that I must pay homage to my Mom’s memory and go forth to Punxsutawney.  So to that end, I made my way to the Punxsutawney Weather Center where I was given a personal tour by the curator – mostly because, I think, she was lonesome and no one else had been thru the doors that day or was likely to do so.  Also, she liked my Mom’s story.  The curator did share a “secret” with me, Phil doesn’t come out of his burrow to check the weather, he comes out of his burrow to look for a female…he could care less what the weather is…  Well, whatever.  I know my Mom would be happy I made the trip over there, even if just to humor her memory. 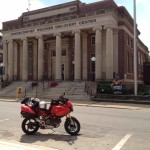 RideAbout65 Day 15 report – Part 3.  My intention was to travel from Punxsutawney to Dayton, OH via back roads.  I would be meeting up with my old friend Dave and we would do a little riding in his backyard.  I was getting ready to leave the Punxsutawney Weather Centre when I decided it might be a good idea to check the rear tire pressure.  I checked it and it was down about 5 psi or so.  This was not good as it meant the tire plug was leaking.  Now decisions had to be made.  RideAbout65 has been all about back roads and avoiding interstates but now with a leaking tire I realize it would only make good sense (a novel concept for me) to stick to the interstates, keep checking the tire pressure and pumping it up as necessary.  I really need to get to Dave’s where we can put our heads together in his garage and ponder what to do and how to do it.  It is also getting late in the day and Dave’s house is still 300 or so miles away.  The rear tire leakage rate continued to increase during the day, where it was about 5 psi/hour, it increased to 10 psi/hour.  That was worrisome because it meant my tire plugging job was deteriorating.  I was stopping about once an hour to put air in.  I was surprised at the rest stops at how many people offered help when they saw me working on the tire – sort of restored my faith in my fellow humans. I was taking I-80 west over to Akron, then I-71 southwest to Columbus, OH and finally I-70 west into Dayton.  As it got dark I did a little math to predict my arrival time in Dayton, it appeared I would not get there until around midnight – the leakage rate was now about 15 psi/hour and I began stopping for air about every 45 minutes.  Dayton, OH is not the most picturesque city in this region but it sure looked beautiful when I finally arrived.  I checked into the Hampton and texted Dave that I would see him the next morning.

Adding air with my Cycle Pump at rest stop.