RideAbout65 Day 7 Report.  Heading North out of Portland I began seeing the watch out for moose signs and I knew I was getting seriously north. I had only seen them in Alaska before. I kept going North through lots of little settlements but no cities of any size until I got to Newport, ME where I turned east thru Bangor and then on to the border town of Calais. Although it is a smallish and out of the way border crossing, it still was a quite imposing facility – all new and all business. But the border crossing was without incident and about a minute or two tops. Of course, I was the only one crossing – my border guard was sort of like the Maytag repairman of border guards. While she was asking questions a second guard came outside just to look at my bike, “A Ducati, we don’t get many of those thru here”. Which brings up an interesting subject – questions people ask me or statements they make to start a conversation. “What kind of bike is that?”; “Is that your Ducati?”; “Did you ride it all the way from Tennessee?”; “Where are you headed?”; “I used to have a Harley”; the guys say, “That’s a neat bike” or “That’s a cool bike”; the women/girls say, “That is a beautiful bike”, or almost as often “That is a beautiful Ducati”. By my count so far, more women know it is a Ducati than men do…must be all those fashion commercials they have Ducati’s in or movie appearances. And more women have said it was a beautiful bike than guys have said it was a neat/cool bike. Whatever that means, if anything. Anyway, back to the trip – after crossing into New Brunswick the road was a brand new 4 lane all the way to Saint John (my map had shown it as a secondary type road – should have had a newer map). I rolled into Saint John and promptly got lost looking for my hotel as the address in my GPS was old and the actual address did not show up as valid. So I had to revert to “old school” navigation “when lost” tactics. I stopped a person on the sidewalk and asked where it was. “Right there behind that tall building”, she said. I had been going around and around it but could not see it – could not see the tree for the forest. Easy street was mine 30 seconds later. I am in Saint John, New Brunswick and my odometer now reads 1951 miles. I am a bit tired. 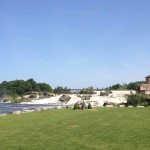 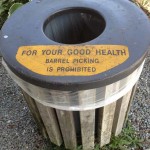 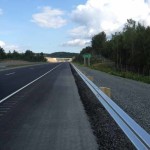 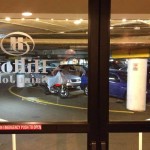