I got an early start and made my way from Cypress up to Southern Calif Motorcycles in Brea for a bit of preventative maintenance on my trusty steed.  As promised, the service department got me right in and out quickly.  While service took care of my bike I went into the showroom to lust after the newest and hottest Ducati bikes.  That Hyperstrada looks nice but it will be a tall order to win me away from my happy little Multistrada.  After a very short wait and a couple of cups of excellent complementary coffee the service was done. When I went to pay I got a big surprise, the service was free for a traveler that had come as far as I.   A nice way to start the day.  I called Alex only to find he was stuck in a meeting at work – so it would have to be next time for our visit as I had a pretty ambitious day ahead.

My next stop was Calabasas, the Helmet House supply company.  It would be about an hour slog up the freeways – since it had been a while since I had ridden a motorcycle on the freeways and split lanes, I was a bit nervous since I had saddlebags sticking out.  However, in a few miles, the old habits kicked and I was making great time against the stacked up automobile traffic.  Too bad the rest of the states don’t allow lane splitting – it gives a motorcycle a huge advantage in the dense traffic of the LA area.  So why was I going to Helmet House anyway?  I had managed to lose the liner for my Tourmaster jacket, most likely left in a hotel room.  Ed Krass at Mid-South Motoplex came to the rescue again, as usual.  Ed put his crack partsperson Shannon on the task of finding a liner and getting it to me somewhere along my route. Shannon worked with Rick at HH to find a liner and then set about figuring how to get it to me.  By good fortune, timing was on our side for a change as we found that it did not really have to be shipped anywhere – I was only about an hour from the warehouse.  Rick had it ready for me when I rolled up into the parking lot.  It worked out better than we even thought as I would find later in the day I would need it in the mountains.  Another job well done by Ed and Shannon.  I have over the years, found that I can always depend on Ed and his crew to do whatever even when it seems impossible.  Helmet House deserves a lot of credit too because they went the extra mile to obtain the liner for me (I think it came out of a jacket on the shelf).

With the jacket situation solved, the next agenda item for the day was to ride the legendary Mulholland Drive and visit the famous Rock Store once again. As usual, the road did not disappoint, it is a Happy Ducati road with twists and turns and elevation changes aplenty.  Not to mention the views and fabulous houses that you could imagine big stars and producers living in.  I rode some sections twice just for fun.  The Rock Store looks just as you would expect, however it was closed so I parked and chatted with some locals who were waiting for their buddies to show up for a ride.  Everyone was interested in my trip and my choice of motorcycles.  Several allowed as how they had never thought much about the Multistrada but might now.  It was an enjoyable experience just talking bikes and roads.  They all agreed that my choice of the next phase of the day, riding Highway 33, was a good choice.  They knew the road well and told me the best way to get there and how to go on to Lancaster, CA after I got to the end.  We exchanged contact info and I set out for Highway 33, one of Southern California’s best sport roads.  Highway 33 is a road that I have been across many times when I lived in CA and when I have visited – it is always a great ride.

Highway 33 between Ojai, CA and Frazier Park, CA is one exhilarating piece of real estate!  Almost no traffic – saw 3 or 4 cars and 2 motorcycles.  As it got later in the afternoon, the temperature dropped considerably, making me very happy to have my jacket liner back.  As I approached Frazier Park at the end of my Highway 33 fun ride, I began to smell and see smoke.  I then remembered hearing on the news this morning that there was a fire burning in the Frazier Park area just off I-5.  Then I passed an encampment of fire equipment and personel.  Right now there are several helicopters going back and forth apparently fighting the fire.  Fire personel are everywhere and I will find later on this evening they will be staying at my hotel in Lancaster.

After the roads to Julian and Palomar Observatory, Ortega Highway, Mulholland Drive, and Highway 33 – The Ducati and its tires are very happy – they got to do what they were born to do.  Even with all the luggage on the Ducati the handling is still all that I want it to be.  There is still a very small  margin at the edges of the tires because I am solo and all these good riding spots are way out – not the time to do something stupid (or more stupid than usual). Curvy road + Ducati = FUN!

Oops, Franklin, we have a small problem – after getting on I-5 for a short distance to pick up Highway 138 over to Lancaster I noticed the bike was a lot louder than it should be or is normally.  When I stopped to check it out on the side of the road I found that 2 of the 3 bolts holding my head pipe to the collector had fallen out and the third one was about to fall out.  I, of course, did not have any bolts that would fit, I tried removing several non-critical bolts to move to the header but none were the right size.  So I just tightened up the remaining bolt and stopped to check it a few times on the way to the hotel.  The next morning I found that there was a bike shop about a half mile from my hotel.  They had a couple of bolts that would work so all is happy again.  Those little roadside emergency repairs seem to always occur far from home… 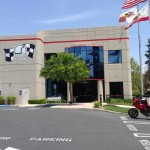 Helmet House – a company that cares about its customers 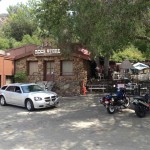 The Rock Store on Mulholland Drive

Hiway 33 – Not only a great road for the bike but stunning scenery for the eyes and soul. 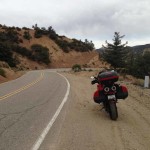 Capturing the moment – what a nice road to have to myself… 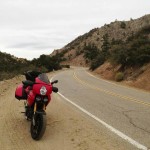 Miles and miles of up, down, and around 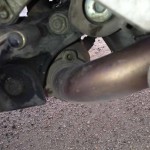 Why my bike seemed so much louder