The ride from Durango to Taos, NM was to be a fine day, more great backroads and I would meet more good folks that would lead me to a place I would have missed otherwise. It was also the day that I finally lined up a massage therapist to work out some of the kinks that had developed with 18 days in the saddle – I finally got smart and called a day ahead. But most other days I had known where I was going to be at any particular time. I had made a plan to stop in Taos because Sandy wanted me to check out the art community there that she might want to visit sometime.

Along Highway 64 near Tierra Amarilla, NM  the road was quiet with little traffic.  But chilly since the altitude is about 8000 ft or so.

On Highway 64 going into Taos through the Carson National Forest – this was one great road (one of so many on this trip) – the Ducati had a big smile as we used all the tire and some of the center stand around the multiple sweeping S-curves…and other curve types.  About half way down the mountain I came up behind a group of Harley trikes and two-wheelers plus their luggage truck with trailer – I slowed up and followed them for a bit, noting that ground clearance on their custom 2-wheelers seemed to be what was limiting their cornering speed to about 20 mph on what were 60 plus curves for, say a Ducati.  I finally decided that I wanted to get back to having fun rather than following in the loud pipe exhaust down the hill.  Opportunities to pass cleanly were not plentiful on this road so I chose the next short straightaway and quietly (nice quiet stock exhaust on my bike) passed the trikes and the truck, waving to each with my best friendly wave.  I tucked in behind the leading 2-wheelers momentarily, then passed and waved to them as we headed into the next set of curves.  As I felt the center stand dragging about half way around the first curve I felt sure they would assess the lean angle and sparks flying and label me a Squid (probably some truth to that at that moment but I really didn’t want to waste my fun following them down the hill).

I stopped down at Rio Grande Gorge Bridge rest stop for a drink and snack.  Just as I was getting ready to put my helmet back on and leave, the group I passed pulled in and parked next to my bike.  They all looked at me kind of funny and then I realized that without my helmet I probably didn’t look quite like the Squid they expected.  I was right about that and I think because of that it was suddenly OK that I had passed them in a squidly way.  I apologized anyway as it seemed to be the right thing to do.  The trike riders were about my age and the 2 wheel riders were their sons.  None of them knew what a Ducati was so we had that polite little conversation.  They said they were headed up to Angle Fire for the rally.  The name Angel Fire seemed vaguely familiar but I could… not remember why.  The rally turned out to be a Memorial Day event in and around the Viet Nam Veterans State Park.  That was it! I had heard of a big Viet Nam Vet memorial in New Mexico years ago before the one in D.C. was built – but I didn’t really know where – I must have heard the name Angel Fire associated with it. They told me exactly how to get there from Taos as I knew that is where I had to stop the next morning.  Without our chance encounter I doubt that I would have found out about it or worse, found out about it way on down the road – I had them to thank for what would be a very moving visit. They actually assumed I was headed there already when they saw my VN Vet license plate surround.  More talk for a while and then off to our separate ways.

One other interesting piece of information the group passed on to me – I had noticed on some of the cow/livestock roaming about signs that there seemed to be something above the cows on the signs.  It didn’t really register with me as I was paying more attention to the road and there were a lot of cow signs.  If you look closely in the photos below (not my photos because I did not take any and there were no more signs after I was told about them) you will see that it is a UFO above the cow. The guys said it had something to do with a rash of cattle mutilations in NM. Weird. Google it…

I rolled into Taos for my massage and a relaxing dinner and talk with the locals.  Tomorrow I would head up to Angel Fire. 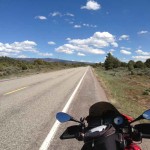 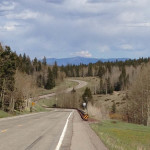 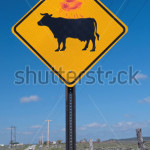