I had a very nice experience at the Hampton in Orange, TX.  Last night when I checked in there was a groundkeeper working out front, a Japanese gentleman perhaps about my age (60’s). He was very interested in my Ducati and seemed to know a lot about them, with my poor hearing and his broken English we spoke in gestures as much as words – but a wonderful conversation none the less. The next morning I was loading up when he appeared again, this time with his wife who also worked at the hotel. He introduced her and after she asked a few questions through him, she produced a carefully wrapped package containing a bottle of water and some energy bars. They presented the package to me with great ceremony and sincerity,and as we returned bows, they told me the purpose of the gift was to bring “Good luck in my travels” – Wow! Talk about good Karma – there are good people left in the world! With that scene resonating in my mind, I rode away feeling all’s right with the world. I had a great ride up north of Houston and down to the San Marcos airport to meet Pat at his hangar. We had a delicious meal nearby at the Gristmill Restaurant (http://www.gristmillrestaurant.com/) and then rode out to his place in Wimberly for a little bike maintenance and to stay the night.  We spent the rest of the evening visiting and getting ready for tomorrows hill country ride.

At Pat’s hangar in San Marcos – Pat has a sweet deal “babysitting” his friend Darren’s immaculately restored vintage T-34 airplane (http://en.wikipedia.org/wiki/Beechcraft_T-34_Mentor).  Very nice plane!  When I was stationed at Edwards AFB back in 1970 I had a part time job as an aircraft mechanic for the base aero club.  One of the club members landed the club’s T-34 without bothering to put the landing gear down (I don’t need no stinkin checklist!) – I had the job of repairing the sheet metal damage to the underside. When it came time to start riveting things back together, I enlisted Sandy to help me (pregnant with Chelsea at the time).  She would get inside and hold the bucking bar against the rivets while I used the rivet gun on the outside…lots of fun nights…(Sandy may have a different take on this heartwarming story…) 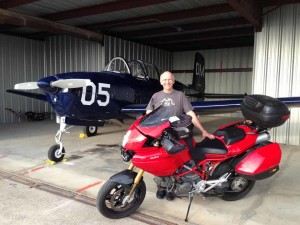 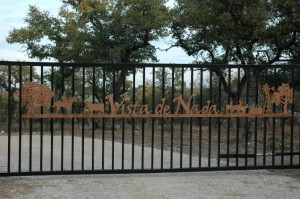 Pat’s Gate – What is the Reference?