I met Don and Todd for an early breakfast before they went to work – had a long and enjoyable visit and then went outside to kick the tires on our bikes.  I don’t think either of them really thought my little Ducati was a proper steed for a trip across the country but then Todd has a Harley and Don has a big Yamaha cruiser.  They both reminded me that it would be very hot and I should stay hydrated and try to put as much distance between Phoenix and myself as quickly as I could.  To this end I decided to break my “no interstates” rule and jump on I-10 over to Blythe, CA and then head across 78 past Glamis to Brawley.  Out of Brawley I would stay on 78 and head into the hills and on to Julian, home of the famous Julian Apples. The road up to and out of Julian would be curvy and fun all the down into Temecula where I would spend the night.

Glamis is pretty much like the face of the moon – not much there unless you really love sand.  I have been riding there in the past with a paddle tire bike – that is fun – just standing around out there is not.

YeeHah!  The great road into Julian is shown on the separate map below.  The temperature dropped from over 100 degrees down on the desert floor to about 75 degrees or so around Julian.  That was a big relief – the ride from Phoenix to Brawley was pretty boring and grim with the high temps. 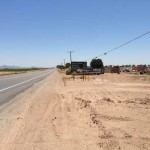 Heading into the Promised Land 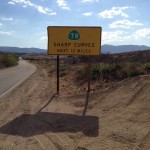 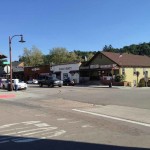 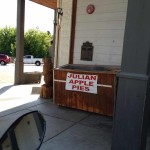 What they come to Julian for!