Pat’s campground for the night was about 50 miles north of Vernal so I left sort of early to ride up and meet him.  Route 191 north out of Vernal was an early morning joy of a mountain ascent into the clouds with almost no traffic.  Man and motorcycle were happy. Again the scenery was ramping up a gear to nearly awesome.  I stopped at Flaming Gorge Dam to take a few photos and ran upon a friendly group of retirees (my age group) – one of the group immediately offered to take my photo with my camera.  As I walked back to my bike three of the men were standing next to it examining various components.  Two of the men approached and mentioned my Vietnam Veteran license plate surround, as many folks tend to do.  We struck up the easy conversation of shared experiences and we chatted until their group started motioning that it was time to go.  I think we could have spent the rest of the morning otherwise.  As I turned toward my bike to go, I felt a hand on my shoulder and heard the words, “Glad we got to talk, have a good trip”– they say it is the small things that count and it is so true.

I met Pat at the planned rendezvous point and we headed on up 191.  Before we took off Pat mentioned some strange behavior from his GPS.  It was a windy ride and we were glad when it came time to stop for gas.  Now Pat mentioned that his phone was not charging – a little more troubleshooting and we found all the accessories wired into his solid state accessory power distribution box were not getting power.  The power distribution box (PDM60) was obviously dead – power coming in but not going out…not what we want.  We called the manufacturer, Pat did some more over the phone troubleshooting and it was determined that the unit needed to be sent back for repairs.  Since it was under warranty, wouldn’t it be more appropriate, given that we were on the side of the road with a dead unit, that they just send a new one?  Maybe a plain old fuse box is a pretty good device after all.  The good part was that nothing essential to the operation of Pat’s bike ran thru the unit, just his GPS, phone charger, auxiliary lights and heated grips.  Now he would have to rely on my GPS for navigation…a dangerous proposition.  They promised a quick turnaround and Pat stopped at the next Fed Ex office and sent the unit on its way.

After that it was just more wind until we stopped in Riverton for the night. 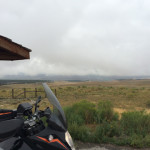 Ascending into the clouds on Rt 191 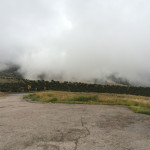 The clouds are coming! 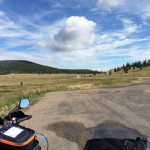 Heading into Wyoming from Utah 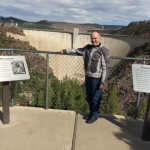 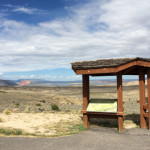 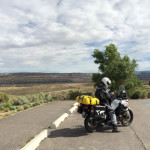 Pat wondering about that GPS