Note: I will likely edit this post later after I have Mark and Karen check it for accuracy and perhaps add a few details.

I met Mark and Karen at the airport this morning and they led me across the taxiways to their hangar.   Opening up the hangar doors revealed a beautiful yellow airplane (Van’s Aircraft RV-6A) with purple accents and a 1965 Triumph Spitfire Mk2 in the final stages of Mark’s meticulous restoration.

As Mark and Karen described the 6 year construction of their plane, Karen kept mentioning her Dad helping with this and that and encouraging her to get her pilot’s license.  Well it turns out that Karen’s Dad was the crew chief on the NASA 747 that transported the shuttle!  Among other projects that he played a key part in was the lifting body project which was the precursor to the shuttle project.  Now I realize that Karen is not only just interested in planes, but that aviation and space are part of her DNA.   Anyway, back to the plane, even though it was a kit plane, it was a minimally prepared kit plane meaning that they had to build their own jigs and cut and fit every piece.  Karen tells me there are about 15000 rivets in the plane, all hand-bucked by Mark and Karen (google “bucked” and “rivets” if you are not familiar with the term).  As a former aircraft sheet metal tech and mechanic myself, I can attest to the perfection in riveting that they achieved.  Karen’s Dad actually came and lived with them for 3 years to help on the project.  Every aspect of the airplane is above reproach – a show quality example of craftsmanship from their first attempt at building an entire airplane pretty much from scratch…not an attempt really…they did it!

Mark’s car is an equal tribute to craftsmanship.  The car is being restored to match a magazine ad that featured the 1967 Women’s surfing champion Joyce Hoffman.  A hint of how Mark researches the details, he even went so far as to track down and interview Joyce Hoffman.  She graciously shared information with him and signed some memorabilia for him.   His last car project was a Shelby Cobra replica which was equally as nice.  The new owner is taking it on the show circuit and doing quite well.

Mark, Karen and I could have talked airplanes, cars and her Dad for hours more – it was like the years between our last visit had evaporated – but it was time to move on.  Once again Mark plotted me a great route down toward the Reno area and I was rolling again.

During our discussions about Karen’s Dad, we determined that he and Sandy were working at NASA at the same time and since she often was in and around the 747 on many of her projects it is likely that she either knew him or at least had interfaced with him during her access to the airplane…small world.  Or had lunch with him since they all ate in the same lunch room.

Mark has routed me out to and through Lassen Volcanic National Forest which turns out to be quite spectacular both in scenery and road quality.  I talk to several motorcyclists during breaks – most are extremely curious about my KTM – I have yet to see another on the road so far.  I have a long and interesting talk with a father and 16 year old son riding together on a Kawasaki Concours.  They are moteling some and camping some – the son seems so animated and excited about the trip – you know it was a great thing for them to be doing together.

As I go south toward Reno I pass through the Plumas National Forest and finally into the Tahoe National Forest.  I decide that rather than head for the tourist trap of Reno I will go to the more laid back and comfortable town of Truckee, CA.   The significant historical event that happened near Truckee was the famous Donner Pass episode where the party of travelers are caught in a blizzard and finally resorted to cannibalism for survival.

I find Truckee so pleasant that I decided to take a rest day here tomorrow.  It has been another great day of riding – I am becoming so used to the seemingly endless miles of good motorcycling roads in California that I sort of dread the next chapter…crossing Nevada… For now that is in the future, I expect that it will have its pleasant aspects nonetheless.  For sure we will be wearing the center of the tires and for a while, no longer the edges. 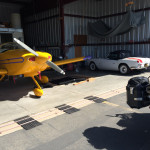 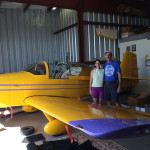 Mark & Karen with their homebuilt plane 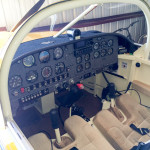 “Office” of their plane 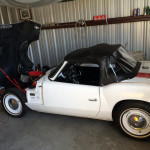 Triumph that Mark is restoring 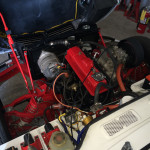 Clean and meticulus work in the engine bay 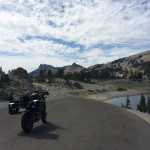 The road through Lassen National Park 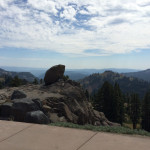 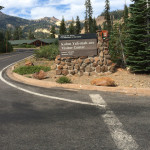 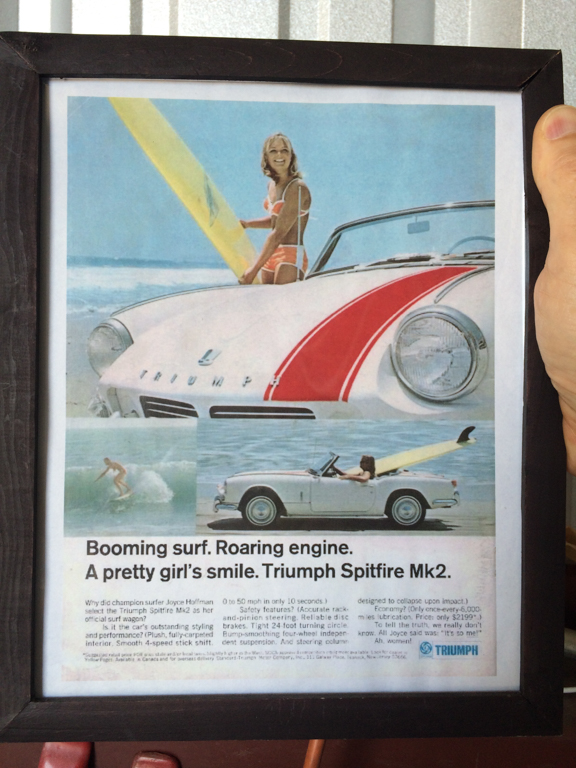