My intention today is to ride all or part of the road around the perimeter of Lake Tahoe so I leave Truckee early to get started.  On the way down to the lake I see a little sign off to the side of the road, “Glider Rides – Turn Here”.   As I passed the sign I didn’t really think much about it at first, then the light came on, I can see a lot more of Lake Tahoe from the air than from the ground, and besides, I have never flown in a glider…watched other folks do it…looks easy.  So I turned around and went back following a small road until I came upon the “Glider Port”.   I went into the office and announced I would like to take a glider ride and would that be possible without a long wait.  Must have been a slow day at the old glider port because everyone jumped up and surrounded me asking a multitude of questions, some of which included the old standard, “did you ride that motorcycle all the way here from Tennessee?”.  A pilot was chosen from the eager bunch, papers were produced to be signed…”if we kill you, it wasn’t our fault”, etc, etc.   How do you want to pay?  Credit card, yes that is fine.  Restroom is around the back.  Here, get in, we will drive you out to your glider.  My pilot for the day, and now I have forgotten his name, was a civil war buff and past visitor to the Franklin civil war sites and he knew a lot more about it than I.  But he graciously told me all about it as we were being towed aloft by the tractor plane (looked like an old crop duster to me).

It was a little choppy and rough as we circled to gain altitude while attached to the tow plane by a long rope – then, “snap”, we were released from the tow plane and gaining altitude on own.  Suddenly it was quiet except for the wind and the civil war commentary (yes, I have heard that the boards are still stained with the blood of the soldiers having their limbs amputated).  We climbed to about 11000 or 12000 feet which gave me a grand panorama of the entire lake and surrounding area.  Since I was sitting in the front there was nothing to impede my view.  It was a beautiful day and all too soon we were setting up for our landing back on the Planet Earth.

It was loads of fun and the gang at the glider port couldn’t have been more friendly and helpful.  The ground crew seemed to be entirely composed of teenage boys and girls having a great time yet taking their tasks very seriously.

It was an impulse decision to take the ride and in hindsight an excellent one – I think it was even better that it was unplanned and that I arrived at a moment in time that they were able to accommodate me immediately, frankly, if they had said wait an hour I would have probably gone on down the road.

As I rode on down to the lake it became apparent that it is a weekend (a holiday weekend at that) and there is a lot of traffic all going the same way as I.  As I made my way around the lake I decided I would just do the top third and then take route 50 out to Carson City and beyond.  I stopped at several overlooks to get a few photos – but the overlooks were crowded with lots of people doing the same.   But it was nice to talk with several motorcycle groups and individuals.  I had a long conversation with a couple on a fairly new Triumph Tiger.  He was very happy with his Triumph but was very interested in my KTM and my trip.  They were planning a trip of their own in a few weeks so we talked a lot about routes and weather.

More traffic, but finally I picked up Route 50 and made my way over to Carson City.  Route 50 from here over to and maybe past Ely, NV is known as the Loneliest Highway in America, it is the road I will take to Ely but tonight I will go only as far as Fallon, NV.

I stop at the KTM shop in Carson City to take a break just as they are closing up.  Craig the parts guy invites me in anyway, gets me a bottle of water, and we have a big conversation about all manner of things motorcycle.  He also tells me I need to stop in Middlegate to observe the locals and maybe eat breakfast.  We bid our farewells and I thank them for their hospitality, making a mental note that their looked very well equipped – never hurts to have a mental list of potential saviors.

As I head over toward Fallon the green of watered cityscapes fades to the natural drier desert colors.  Tomorrow, Katie and I will accept the challenge of the Loneliest Road in America…I fill up Katie’s fuel tank in anticipation… 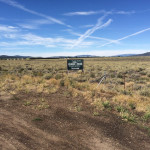 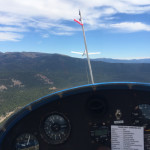 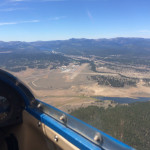 View of the airport we just left. 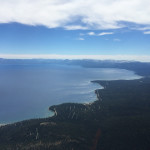 Lake Tahoe – can’t get this view from the ground. 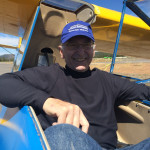 Back on the Ground! 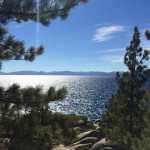 Here is what you see from the ground of Lake Tahoe. 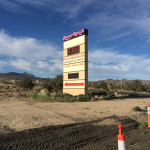 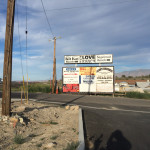