I am listening to:  Janis Joplin, Rolling Stones, Animals, and Crosby, Stills, and Nash.

Getting an early start to beat the heat I strike out heading East on Route 50, the highway called “the loneliest highway in America”.  Now when I think of lonely I think back to the Extraterrestrial Highway, 160 miles to the next gas, a car passing perhaps every half hour or more and nothing man-made on either side of the highway.  Well, by my definition, Highway 50 is not really that lonely.  The longest period between cars was less than 5 minutes.  There are buildings and farms all along the route.  The loneliest section was from Eureka to Ely but there were still buildings in the distance.  And gas was available about every 50 miles or so.

But Route 50 did have two major draws for me, one was old west history – Route 50 follows the Pony Express route and the other draw was a surprise – the road in many places is a motorcycle dream road.  I expected it to be mostly flat and featureless like the other remote Nevada roads I had ridden on.  But with several mountain ranges running North to South, there were numerous mountain passes to traverse…and that means serpentine roads up one side and down the other.  With all the good sections the straight boring sections did not seem so bad at all.

The Pony Express history is well documented with markers and building ruins preserved along the route.  Having grown up in the fifties and sixties with cowboy movies which often highlighted the Pony Express in one way or another, this ride along the route was a wonderful throwback to that history.  You could just imagine the riders galloping along the trail and arriving at each station for fresh horses.  It was also sobering to realize that these people were really on their own out there, no 911 to call in emergencies.

Craig at the KTM shop in Carson City had recommended I stop at Middlegate Station to observe the locals in the wild and perhaps eat breakfast.  Yes it was an experience.  Middlegate is totally off the grid – power comes from their own generator.  There was a core group of folks who seemed to be the permanent locals and then there were some outside in campers that seemed temporary, perhaps camping over the weekend.  Then a few others that were staying in the motel type rooms – some appeared long term hangers-on.  Middlegate is an old Pony Express station and lots of old stuff is laying about.  It is not what you would call restored, it just has not fallen down yet.  Inside, the walls are covered with memorabilia of various types.  Lots of patches and other and signed photos and lots of dollar bills on the ceiling.  There is a strong military presence from the Naval Air Station at Fallon.  And flies…a lady with a fly swatter walks around killing flies and sweeping them on to the floor.  In spite of that, I heed Craig’s suggestion and order breakfast.  After I order and get some of the self-serve coffee, the order taker says the cook is on break and will be back soon.  About 15 min later a guy that looks more like a ranch hand comes in and starts cooking – he finishes my breakfast and wanders back out again,  the food was actually OK, but it is hard to mess up eggs and toast.  When I was walking out to my bike I saw the cook sleeping in a chair on the porch.

By the time  I rolled into Ely, I felt that I was well-steeped in old west history, good motorcycle roads, and a little local color.  It was still a little early so I went down to the historic train station were a small festival was going on.  Plenty of locals to chat with and an operating steam train to look at. 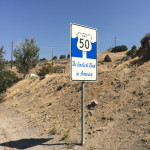 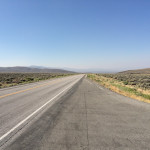 One of the loneliest places 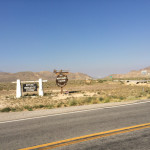 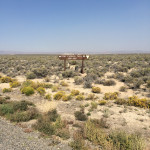 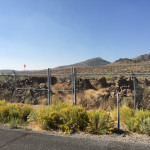 Ruins of a Pony Express building 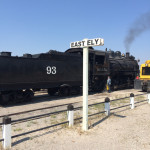 The steam train in Ely