I woke up this morning to the sounds of thunder and rain.  I waited around and checked the radar to see if it was going to end anyway soon…it wasn’t.  So today would be a good test of the new KTM’s rain manners.  Since it was raining so hard and my Shoei flip up helmet is not good in the rain (fogging, etc), I altered my route to Seaba to a run down the interstate and then cut over to Chandler.  It is much easier on me in the rain if I don’t have stops and starts and side traffic.  The KTM with the touring windshield definitely has better airflow and protection in the rain than the Ducati, so that is a plus.

I rain out of the steady rain in about 50 miles, then about 25 miles of showers/sprinkles and then sunshine.  By the time I reached Seaba it was a very nice day.  Seaba had not changed much and the proprietor was as friendly as ever.  It was busy this day, a large group of French tourists on a Route 66 expedition and several groups of others.  I met and chatted with a retired professor and Route 66 enthusiast from Portland on a Harley who was doing the Route from Chicago out to a big Route 66 gathering in Arizona.  Turns out we would end up at the same Hampton in Clinton that evening.

Seaba has a nice motorcycle museum and one bike in particular that was interesting to me was a 6-days MZ that had only 10 km on the odometer.  The story was that it was a bike taken to the 6-Days for spares but was never used – now in a museum complete and untouched.

I hung around a while looking at the bikes and talking – a very pleasant hour or two.  Next was to head up Route 66 and end up at Clinton, Ok for the night.  For a while 66 was easy to follow, then around Oklahoma City it really got confusing, I spent probably an hour or so trying to pick it up in Oklahoma City, finally I jumped on I-40 since I knew it ran parallel more or less.  A few miles out of town I got off and found it again.  In this area the old road was really in bad shape – scenic but bumpy, full of pot holes and bad pavement repairs.  I then lost it again when I missed a turn and the road turned into an on ramp to I-40.  I made use of the KTM’s off-road abilities and rode across a field to get back on the road in the opposite direction to avoid going miles out of my way down I-40.  The bike worked just fine across the field and a couple of ditches – an adventure bike might not be a real dirt bike but the ground clearance and off-road handling are just right for such a occasion as this.

This section of Route 66 is pretty desolate actually and grown up with trees and bushes on either side – if the pavement was better it would be a really nice road as it has lots of nice up and down hills and curves.  You almost forget that I-40 is less than a mile away and in some sections only 500 feet or so away.

Rolled into Clinton and met up with my new friend.  We talked for a while and exchanged contact info.  The next day he would continue on Route 66 and I would head north west toward Taos with a likely stop in between  for the night at Clayton, NM.  Today was a great day! 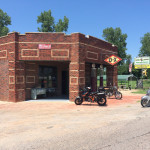 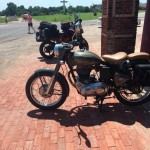 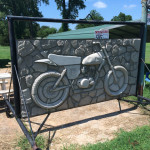 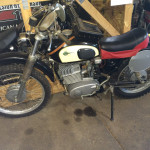 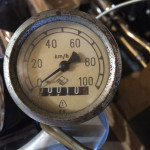 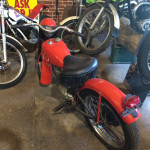 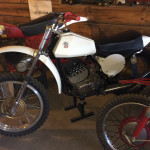 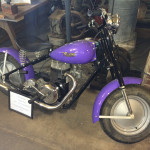 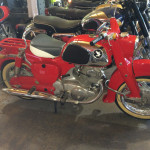 The beginning of the Honda invasion 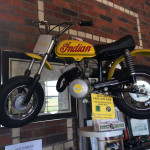 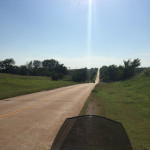 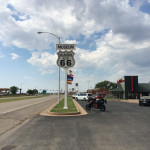