Pat was sitting in the hotel lobby when I came down for breakfast – our meet up was successful!  But he was there so early only because his phone had not adjusted for the time change yet…he could have slept another hour.

Our plan was to ride north to Saguache, CO where we would look for the so-called “Secret Vietnam Memorial”.  Pat and I had discussed going to look for it a couple of months ago and since it was located about 15 miles off road up in the mountains, I was really glad he offered to go there with me because 15 miles is a long way off the beaten path to ride alone on basically a big street bike.  A minor problem could become a major problem very quickly.

I had only recently become aware of this memorial when my friend Tom from Jackson, TN forwarded me an email about it.  As I read the email, I immediately  wanted to go there.  As I thought more about it, I soon became drawn to it much like Richard Dreyfuss was drawn to Devils Tower.  I wasn’t building models out of mashed potatoes but I really wanted to go there…  When Pat and I discussed the location he told me the last time we went dirt bike riding in Colorado we actually rode in that area and probably passed within a mile of the memorial.

We left the hotel and rode north to Alamosa and then over to Saguache.  From Saguache we followed the road west out of town until we got to a gravel road that would connect with other gravel/unpaved roads and/or jeep trails and hopefully take us to the memorial.  The gravel road was in pretty good shape except that it was quite rocky, some quite sharp.  I am not sure how far we were up the gravel road, but certainly no more than 3 miles, when I felt the tell-tale rear end waggle that screamed “Flat Tire!!”.

With the sky turning dark and lightning starting to flash around us, we began to realize that we were actually lucky to have the flat at this point rather than 10 miles further up in the hills where the terrain might be sketchy and where we might have rain pouring down us.  With the weather situation worsening by the minute, we worked as fast as we could to take stock of the damage and get busy trying to make repairs… if possible.  Meanwhile, Pat was eyeing our surroundings for any possible shelter if the lightning started to get really serious.  It did not take long to find where the air came out – a rock cut about a three fourths of an inch long down between the treads – not anything like a simple nail hole.  But for once it seemed that I had made a good choice of tire repair tools – I had a Stop & Go tire plugger with mushroom plugs – I put one plug in after finally figuring how to make the plugger work (boys and girls – do try this at home first – learning by the side of the road is not the best method…).  Pat tested it with some water – it blew bubbles like a carnival ride.  So I put in a second plug next to the first – Ah Ha!  No visible bubbles.   We finished airing the tire with my Cycle Pump and figured on heading for Gunnison, about 65 miles away.  We would keep the speed down and stop and check the pressure every so often.  With the right tools and a centerstand on the bike – we were done in less than 30 minutes and before the rain really started coming down.  It just started serious rain as we pulled out for Gunnison.

Even though it took us a long time riding at about 40 mph, the trip to Gunnison was uneventful, only a little rainy.  I had put 40 psi in the tire – at the last check maybe 20 miles out of Gunnison the tire still had 35 psi in it but it had started to leak just a little bit.  The city limit sign outside of Gunnison was a very welcome sight.  We checked into a hotel and pondered our next move.

It is sort of funny that I had already planned to replace that tire on Tuesday because the wear bars were showing already at 2500 miles.  The SMT obviously ships with a sticky tire in keeping with the Super Moto part of its name.  However, the game was now changed, I had to have a tire now, not later.  Since the next day was Monday that meant most shops would be closed.  There were only two shops in the area that would be open on Monday, one in Montrose, 70 miles away, and Fritz Kadlec’s dirt oriented shop here in Gunnison (not likely to have a proper tire).  I realized it might be Tuesday before a tire could be located and installed.

Back to the original purpose of our expedition – visit the Vietnam Memorial at Sargents Mesa – we decided it probably would not be a good idea to attempt the trek up the mountain on these bikes again.  After some consideration we were pretty confident we might be able to get up there in a rental car or better, a rental SUV.  Late on a Sunday afternoon in a small town is not the best time to find a rental anything but again we lucked out – AVIS was still open and they had a small SUV available.  Pat took me down to the airport on his bike and I drove the rental back to the hotel.

A second attempt at Sargents Mesa would commence early Monday morning, after which we would work on solving the tire problem.  I would make some calls during the drive back over to Saguache.

In the meantime we put together plans to go to dinner with Allan and Kerrie Swartz, who were out vacation riding in the area from Moore, OK.  Kerrie raced in the International Six Days Enduro (ISDE) as a member of the United State’s women’s team for the events held recently in Mexico and Finland.  Kerrie and Allan were have a great time in Colorado camping and riding their vacation away.  It was great to see them again, I had seen Allan recently at the Loretta Lynn’s GNCC but I had not seen Kerrie since Finland.  I had planned to visit them last year during RideAbout65.2 but the tornado hit Moore just before my trip so we understandably postponed that visit. 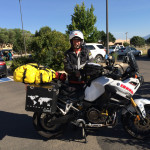 Pat and his Super Tenere 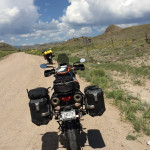 Starting up to Sargents Mesa 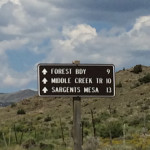 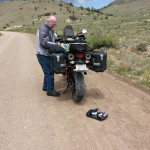 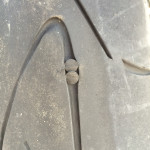 Tire plugs in the rock cut 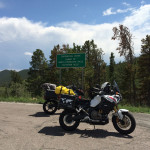 Half way to Gunnison