We returned to Gunnison to sort out the rear tire issue on my bike.  Since it was Monday, few motorcycle shops were open – however, a dealer in Montrose was open and I had talked to him by phone while we were driving back.  He was fairly sure he had a tire but his service department was not sure they could get installed today.  Also, going to Montrose for the tire would involve driving the bike another 70 miles on the plugged tire.  The other thought we had was just to wait until the next morning (Tuesday) and go to the dealer in Gunnison, although that would be a bit of a gamble with regard to if he had a tire or not.  While we were mulling over what to do, we decided to drive over to the dealer in case someone happened to be at work and also to confirm what time they opened.  As we really expected, there was no one at work so we got the opening time info from the door and started to leave when we noticed that the small independent off-road shop run by multi-time IDSE rider/gold medalist Fritz Kadlec was open.  We did not have much hope that he would have a street bike tire, let alone a tire for my bike but we thought it would be nice to drop in for a few minutes…and it never hurts to ask.

When I asked about street tires, Fritz’s wife said they actually did have a few and if we could wait a few minutes she would go upstairs and see what she could find.  She went up and rummaged around a while, when she re-appeared she was holding a tire and saying she thought it might work.  We all gathered around the tire like it was the holy grail while she looked it up in her catalog.  Well, it was the right size, it was a radial, and it was not a track day tire…at that point I would have taken just round and black.  She had performed an actual miracle as far as we were concerned, even though it was a different brand than the front tire it would work just fine (it would be worn out by the end of this trip anyway) AND most important, we did not have to go to another town or wait another day…we hoped.  Now the best part, I realized it was getting late in the day already, but when I asked what time they closed the shop, she said, “after we finish with your bike”.  It just does not get any better than that – a true old school motorcycle shop that cares about your problems — that philosophy is getting pretty hard to find these days.  And it is not that they were not busy, on the contrary the shop was full and Fritz and his wife were determined to solve each and every person’s problem or need before they went home that evening.

We went happily back to the hotel and put air in the tire (remember that little leak?) since it had gone flat overnight.  After we dropped the bike at Fritz’s shop we took the rental car back to the airport and then rode double on Pat’s bike back to the shop.  Within 30 or so minutes after we got back it was done, the mechanic even lubed and adjusted my chain while he was at it.

This experience just oozed good karma – Fritz and his wife are the best kind of people – we just wish the world was completely populated with their kind!! But in the mean time remember Gunnison Motorsports if you are even in the area and need anything motorcycle or even if you are not.  They deserve your business.  And they are now a Husqvarna dealer as well.

It was very late afternoon when everything was done and we were ready to travel again.  We had decided to head on to Montrose because Pat’s friend Darren has a house there.  I had originally planned to go over to Colorado Springs for a visit with my old high school friend Fred but now I decided I would have to visit him on the return trip instead.  We needed to head toward Glacier National Park and ride the Going-to-the-Sun road so that Pat could head on to Canada (he has a place to be on a certain day).

The ride over to Montrose was pleasantly uneventful. 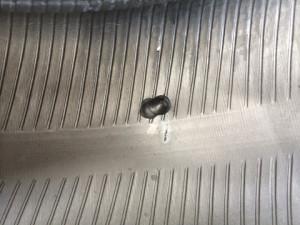 Inside tire view of tire plugs.