We left the hotel early Monday morning in the rental SUV.  Our destination was Saguache for another go at finding the memorial on Sargents Mesa.  We turned onto the same gravel road just outside Saguache, driving conservatively in hopes of avoiding any tire problems.  As we went further along the road we found it to be in surprisingly good shape and well marked.  However, as we started up in elevation the road got somewhat rougher and much more rocky, finally turning into a narrow jeep trail as we got near the mesa.  But all things considered, we reached the mesa in the rental SUV pretty easily even though we did make a couple of wrong turns and some back tracking was necessary.

We were able to drive within about a quarter of a mile of the memorial – there was a fairly new fence and a sign indicating that the site should be respected and not to drive any further.  This has been mentioned in all the articles I have read about the memorial – approach on foot as driving on the ground around the memorial is disrespectful – it pains me to see photographs of my fellow dirt bikers and their bikes right up at the memorial.  I have heard that some veteran’s ashes are spread about the memorial grounds…

The memorial site on Sargents Mesa is extraordinary – open and desolate but beautifully forested on the sides, with the blue sky above and the  peacefulness that only comes from its distance away from the rest of the world.  Pat and I walked in silence over to the main stone obelisk surrounded by a triangular stacked stone wall.  Chipmunks ran along the walls with seemingly no fear of humans, obviously they knew we were here for something other than them.  In addition, we found about 30 or so flat stones with inscriptions in many languages distributed around the central obelisk out in the field and trees.  We may not have found them all as the grass often obscured them until you were right on them.  In an ammo box at the base of the central stone obelisk was a couple of notebooks were you could sign your name and write down your thoughts.  Also in the box were all the coins and shells that you see laying on the stones in some of the videos and photos posted on the internet.  Perhaps the Forest Service put them there for safe keeping.   Interestingly, all the signature dates started about the time the memorial first appeared on the internet…apparently before that there were few visitors and no records kept.  There were a lot of names in the books – obviously there are lots of other folks just as compelled to visit this site as I have been.

I think the memorial was intended to be called “Soldierstone” since that word is inscribed at the top of the obelisk on one side.  I have seen that others have also called the memorial Soldierstone, and personally I think it is a fitting name.

Mere photographs do not convey the power of this memorial to the souls of our fallen brothers and sisters.  The memorial is simple yet at the same time complex – when you combine the simplicity and complexity with the solitude of this remote location the result is a unique and spiritual feeling that is difficult to describe.

After exploring the site thoroughly and accompanying me while I placed a memento for my friend Jack, Pat went back to the car so I could spend some time alone with my thoughts.  I was there for a while when suddenly a black and white dog ran up to me and licked me on the face.  I was quite surprised to say the least as I thought I was all alone.  It turns out that the dog’s owner was checking on their cows that were grazing nearby.  She stopped and talked with me for a while…the dog’s name was Applejack.

Finally and very reluctantly I made my way across the field to descend back into our regular world.  For me this memorial is of special significance and joins on equal footing those other sacred destinations of my era veterans, the Wall and Angel Fire.  I will return here someday, hopefully soon.

View from the Obelisk 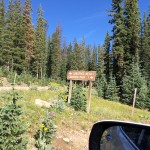 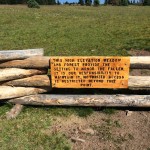 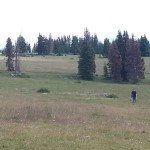 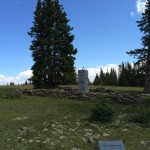 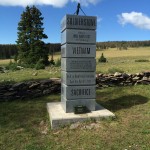 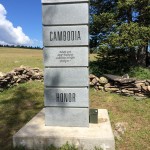 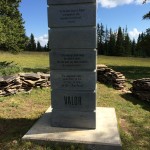 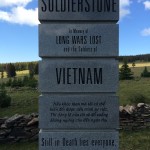 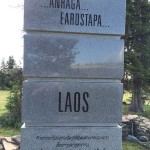 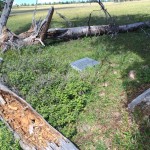 One of the many individual stone tablets 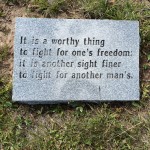 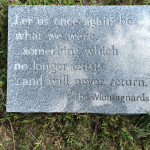 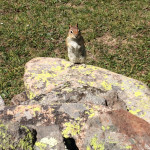 One of many fearless chipmunks 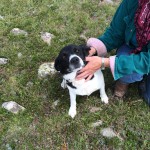