I really wanted to go back up to SoldierStone again.  Since I did not get to visit Fred and Chantel on the way out due to that pesky flat tire episode, my route back to visit them would bring me close enough to Sargents Mesa to consider a drive over there.  I was thinking of renting an SUV again and forgoing the risk of another flat on that rock road.  When I mentioned this plan to Fred, he immediately said he would like to go up there with me and we could go in his 4WD truck.  So the plan was set.  We decided to go up on Saturday.  The road up to Sargents Mesa was still rocky and rough in spots, and although the lower part had been graded recently, it still took us about an hour to get up there after leaving the pavement.

When we got up to the parking area, we were a little surprised (but not that much due to the internet traffic) to see another car parked there and a group of folks making their way back.  As we met up with the group and chatted with them we discovered they were from Henderson, TN!  Just a few miles from where Fred and I grew up.  What a coincidence!

When I had last visited on my way out, the monument had been cleaned of change and bullets, etc and all stored in the ammo box.  Today the monument was once again covered with change and bullets – a lot of visitors had apparently made it up there in the short time between my visits.  Also, someone had brought a bunch of American flags up and placed them all around.  Just knowing that people obviously care made me feel good…and glad I had made a second trip.

Fred and signed the visitor’s book in the ammo box, left a few coins, and after some time to reflect once again we took a look at the dark sky and began our hike back to the parking area.  While we were there we saw about 6 or 8 hikers making their way along the Continental Divide trail.

We headed down into Sequache for lunch, settling on the 4th Street Diner and Bakery.  What we did not know is at about the same time, Darryl and Suzy Moody were at the gas station on the other end of town…  When walked into the diner the girl behind the counter initially said they were closed for lunch, then she talked with the cook and apparently put in a good word for us because he said sure he could cook a couple of burgers.  The service and food were as good as a person could hope for – we left happy and full.

We poked around a couple of shops, took as few photos and headed home to Colorado Springs – it was a good day, made that much better because it was spent with an old friend. 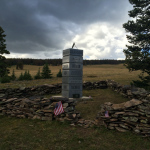 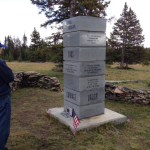 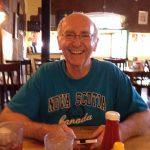 Tom has just found out the diner is open for lunch after all. 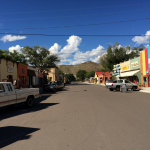