Although hanging out with large groups of loud motorcycles is not an activity I generally seek out or enjoy, this particular gathering is an exception because of the theme. I was so very glad that I made the effort to go, and in fact, I have already made hotel reservations for 2016.  If you are not familiar with the Rolling Thunder motorcycle rally in Washington DC on Memorial Day weekend, it is a gathering of thousands of motorcycles parading from the Pentagon to the Vietnam memorial in support of veterans. Although the run was originally established for support of Vietnam Vets and the accounting of POW’s, support is now extended to all vets of all wars and/or conflicts.  From viewing past photos and video I thought perhaps it would be an event populated primarily by Harley riders but I found there were a significant number of non-Harley riders as well. As a Vietnam Vet myself, I found a warm welcome and my KTM ride was not an issue in the least. 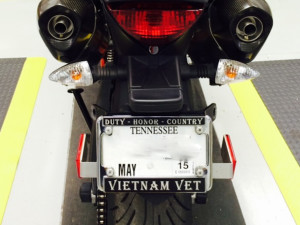 My Ticket to Rolling Thunder

My route to Washington DC was to ride east and pick up the Blue Ridge Parkway at it’s beginning near Cherokee, NC and then ride the length of the Blue Ridge and Skyline Parkways north to where they end near DC.  My return route was through Ohio and Kentucky after a work induced delay. Sandy flew up to join me for the Memorial Day weekend in DC.